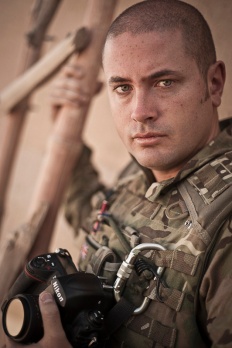 Sergeant Steve Blake is a professional Army Photographer with the Royal Logistic Corps. A trained soldier, Steve has recently returned from a six-month tour of Afghanistan as part of the three-man Combat Camera Team (comprising a trained journalist, photographer and video cameraman).

The most glamorous spectators

It has been a varied first week back at work in the Army Headquarters. Monday and Tuesday were relatively slow days, doing vital admin, and catching up on 100 or so emails, on my work terminal, that arrived during my time away. Despite having an ‘Out of Office’ reply set, the emails still kept piling up.

As most of you know, I have been doing a lot of work in my leave with the Salisbury Plain Military Wives Choir. Now I was back to work, it was about time they got some official coverage from us at the Army News Team. With their schedule firmly imprinted in my diary, I set about going to London with them as they performed at the House of Commons and Portcullis House.

The choir had been invited by the MP for Devizes, Claire Perry. Claire covers Bulford, Tidworth and Larkhill within her constituency, and wanted to show her appreciation by inviting them to this special event. After a tour of The House of Commons, the choir got to sit in the gallery and watch a debate. Claire told us later on, that Mr Speaker commented on how they were the most glamorous spectators he has ever had in his gallery.

Once the tour was over, and a group shot was taken on the staircase in the Grand Hall, the ladies had some time to change and warm up for their performance. 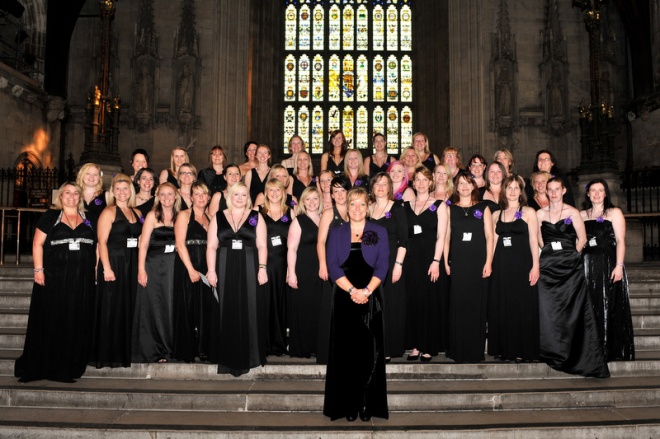 The choir absolutely loved the day, and their performance was absolutely amazing. Despite hearing them sing quite a lot, the songs never bore me. In fact, I hear them get better every time they perform.

With ‘Wherever You Are’ being the most well known wives choir song, two of the ladies sung their hearts out for the crowd on the solo part, with the rest of the choir doing a great job behind them.

Luckily, several of the Armed Forces Ministers were able to attend. Sir Andrew Robotham and Philip Hammond, The Secretary of State for Defence to name but a few. They were all totally in awe of these women, and spent time talking to them, and giving them praise for their hard work. They also commented on the vital support they give their husbands in such a career. I am proud to say that my wife is part of this amazing choir, and is she the most supportive person I know.

With a few speeches done, there were just a few songs left. By this point, the crowd had grown somewhat, as more politicians finished work.

Performing to the masses 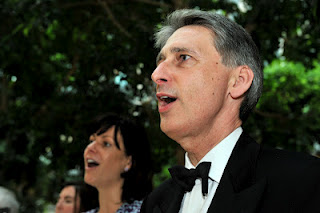 Philip Hammond then got invited by Claire Perry to say a few words.

With the performance coming to an end, it just left the National Anthem to sing before heading home. Philip Hammond and Andrew Robotham were then invited to sing with the choir. With Andrew Robotham firmly within the choir ranks, and Philip Hammond stood with Claire Perry, it was quite an impressive rendition. The whole of Portcullis House were on their feet, singing along too. Spectacular.

After that it was time to pack up, interview all the people I needed for my story and catch the coach home. The day had been great. Very hot, but great. We were all sweating lots, but it was worth it.

Outside the House of Commons

It was the next morning I got the story finished and published on the British Army website, along with a picture gallery on the Army Facebook page. Claire Perry has used the story in her constituency leaflet and the Salisbury Journal have published it too. Hopefully more people have used it by now, as it helps raise awareness of the choir and their good work.Then it was all change! I had to quickly get my kit, drive to Longmore and photograph Number 1 Company, Irish Guards conduct riot training. This was in preparation for a future contingency role, in EU-led peacekeeping missions and the Olympic security. Quite a variation for my first week back eh?

More from me soon.

Sergeant Steve Blake is a professional Army Photographer with the Royal Logistic Corps. A trained soldier, Steve has recently returned from a six-month tour of Afghanistan as part of the three-man Combat Camera Team (comprising a trained journalist, photographer and video cameraman).

Sorry I have been so quiet over the last month or so, it’s been manic here! I left Afghan around the 19th of March, did the usual stop off in Cyprus, which was actually quite enjoyable, despite just wanting to get home, then landed around the 21st in the UK.

As most of you would have seen my end-of-tour slideshow by now, all I can say is, what a relief! That was such hard work to get off the ground, I am just glad it all worked out. I checked the other night and have over 8,000 hits on YouTube now, and the feedback I have got from my official Twitter (@CombatPhot) has been amazing!

So what have I been up to? Well… three days after landing back in the UK, I was in London giving a talk at the Imperial War Museum on Photography and 21st Century Conflicts. The talk was very well attended, with an audience of over 50, and went down a storm. Making the most of being in London, Mrs Blake, some friends and I made a weekend of it. We checked into an amazing apartment for the night, visited the Ice Bar and went to see Shrek the musical, which was brilliant!

So this is what i’ve missed out on for six months eh?

After the initial rush to get ready for London was over, it was back to reality, living at home with my family all over again. Six months is a long time to be separated, and everyone has to get used to being around each other again. Sounds weird I know – they are your loved ones and you have all missed each other dearly – but, in a roundabout way, got used to being apart. Using china plates, metal cutlery and being able to wear clothes other than MTP were novel changes for me!

So after a week or so back at home, readjusting, and doing menial tasks that I haven’t missed, like food shopping, I was off on another adventure. This time I was Italy bound. Taking advantage of the school half term, we took the boys away for a week’s holiday. My lovely wife had booked us an apartment about 40 minutes from Venice, giving us plenty of scope to admire the sites in the location we stayed but also travel into Venice for the day. 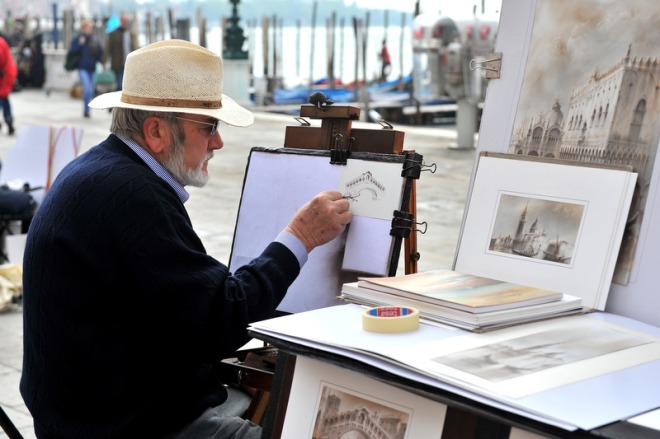 Venice is very picturesque in my eyes, although many say its old, decaying and smelly. Well, what do you expect from a city built on water, believed to have been discovered back in 421 AD? The place is still brimming with culture, colour, life and soul of a true Italian city. I just loved it, soaking up the atmosphere was great. 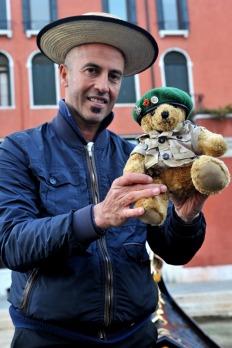 Marny Miles with the Gondolier

My wife had applied to the Marny Miles Facebook page to take him on holiday with us, and we were successful on getting him on the dates of our holiday. Marny Miles is a bear, created by a Military family, who raise money for the Soldiers, Sailors, Airmen and Families Association (SSAFA). The idea is to get Marny to travel as much as possible, with as many families as possible, collecting memorabilia on the way. This, along with Marny will eventually be auctioned off for the charity.

My son Joseph, 9, was really excited and took him everywhere with us, and we even persuaded our Gondolier to have his picture taken with him too. The least he could do for emptying my wallet! haha. We hope that Marny is successful in raising as much money for the charity as possible. To read more just search ‘Marny Miles’ on Facebook.

Well, that was Venice over. Time to pack and head home. What a cracking break with the family.

I now have lots more leave to take, and intend to spend most of it relaxing, but also busying myself on occasion with various projects I am doing, which I will share more about in the not so distant future I hope.