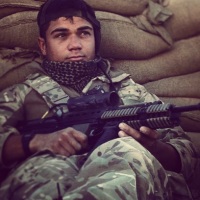 Sapper Eddie Joseph is an Army Reservist with 131 Independent Commando Royal Engineers based in Birmingham. A heating engineer by trade, the 25-year old is currently serving on attachment with 131’s paired regular unit, 24 Commando Engineer Regiment. Sapper Joseph is 8 months into a year-long engagement and has just returned from providing close engineer support to 40 Commando Royal Marines on Exercise Jebel Dagger in Jordan. He describes his experiences of desert soldiering in this blog.

We reached our desert placement late at night and established a harbour with the vehicles.

As dawn broke I surveyed the stark, barren landscape that we were to inhabit. The camp had been sited on a flat plain surrounded by jagged, rocky terrain. Gusts of wind blew up great clouds of dust that nearly choked us, and found its way into all our kit. Everything smelt burned and blasted.

0600 reveille and we set about putting up tents for the marines prior to their arrival. Containers packed with supplies arrived throughout the day and night. This work, along with the water tank and force protection, continued beneath the hot desert sun. The temperature dropped dramatically at night and as we patrolled the perimeter our night vision goggles gave the desolate landscape an eerie glow. 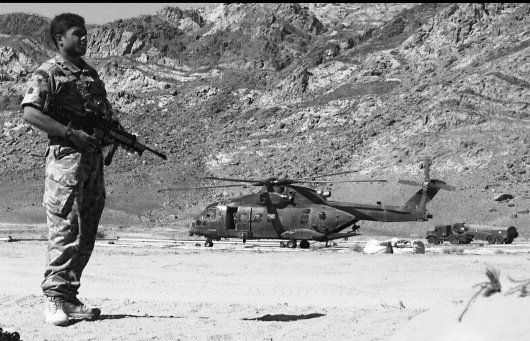 The flat ground contrasting with the jebel country behind. 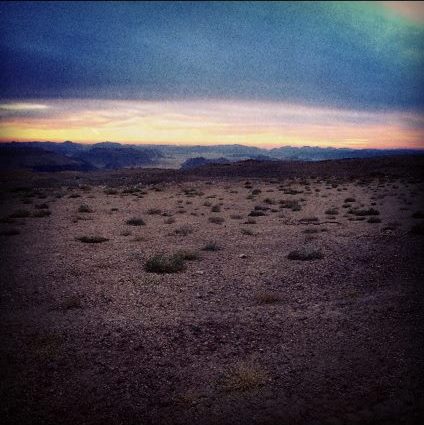 The flat ground on which we build our camp.

I took stock of our surroundings. Within a few days dust and rock had become a proper military camp: a hive of activity. The British Military, with its ethos of hard work and good organisation, had arrived.

The camp, which had begun as a linear vehicle harbour, had expanded rapidly. 18×24’ tents sprang up day and night like mushrooms. It would peak as a 1000-man base enclosed by hundreds of metres of dannert coil and barbed wire that we had erected in the oven heat, smashing in pickets before lifting the razor wire on. We built shower frames and dug out the drainage.

One of the wire fences we built.

By now the Royal Marines had arrived and the field kitchen, providing fresh meals, was established. We began to get some respite from the engineering tasks. Range days were started. Instructors who’d studied in the jungles of Asia taught us how to read signs and spoor left by enemy movement. We learnt ground signs awareness, engine maintenance and vehicle recovery in a desert environment.

We spent our evenings playing risk and poker by torchlight. When Arabic lessons became available I eagerly signed up, keen to expand my cultural awareness. I set upon the locals who worked on camp with my broken Gulf tongue, missing no opportunity to ask  them ‘how are you?’ and greeting them with a cheery ‘peace be with you’. They soon became a lot harder to find!

Mountain training with the mountain leaders.

Taking a rest between duties.

Our section provided demonstrations for medic training and mine clearance lessons. We used our own time to keep fit, venturing out into the surrounding area on long distance runs and hill reps. On one occasion we happened upon a Jordanian army training village. We sat down to rest in a bullet ridden building as the flaming sun set over the desert, an experience one does not come across often.

The camp held a sports afternoon before a day of operational stand down (OSD). We played games of football and volleyball, which I am duly obliged to report that my section expertly won.  Then, for OSD we were taken to Petra – a city literally carved from sandstone cliffs. It was a fantastic place with monuments rising up the sides of the canyon. It began life as Nabataean tombs, and has since played host to Romans, venturesome Crusaders – and now some portly tourists.

Bulk desalination and purification of water at Aqeba.

The next morning we packed our kit, ready to rotate with the section manning the water point at Aqaba port. The water point, next to the crystal clear waters of the Red Sea, made a welcome change from the desert. By pumping seawater through a series of filters and adding a dosed amount of chlorine we could produce potable water for the base in Al Qwarah.

I spent the time between checks exercising in our makeshift gym. It passed quickly. Then I was called back to participate in a vertical assault course with two fellow sappers.  We were trained by mountain leaders to ascend and descend steep faces and cliffs with weapons and equipment, Commando skills we’d previously learned but which demand constant practice.

We were taught how to make improvised stretchers like the clove hitch or roscoe, so that we can evacuate casualties from remote areas. At night I could hear gunfire as 40 Commando practiced live firing in the distance. I remember sitting on a rocky outcrop waiting to abseil down the cliff, watching tracers and flares going off across the desert, lighting up the sky like fireworks.

The following day we embarked upon a navigation exercise around the surrounding area, yomping up to heights of 1300 metres. At each high point we tackled section tests. Stances included judging distance, map reading and medical training that tested patient care and evacuation technique. On some evenings the cultural advisor gave us briefs on subjects such as the formation and history of the Middle East and the Arab Spring.

We then moved into our second special-to-arm package that consisted mainly of demolitions and urban combat training. We spent the days practising compound clearance, advancing our skill level and using explosive charges to gain entry into otherwise difficult to attack buildings. Concentration and attention to detail were vital.  Nothing compares to the feeling of a breaching charge exploding a couple of metres away from you as you prepare to assault a building. 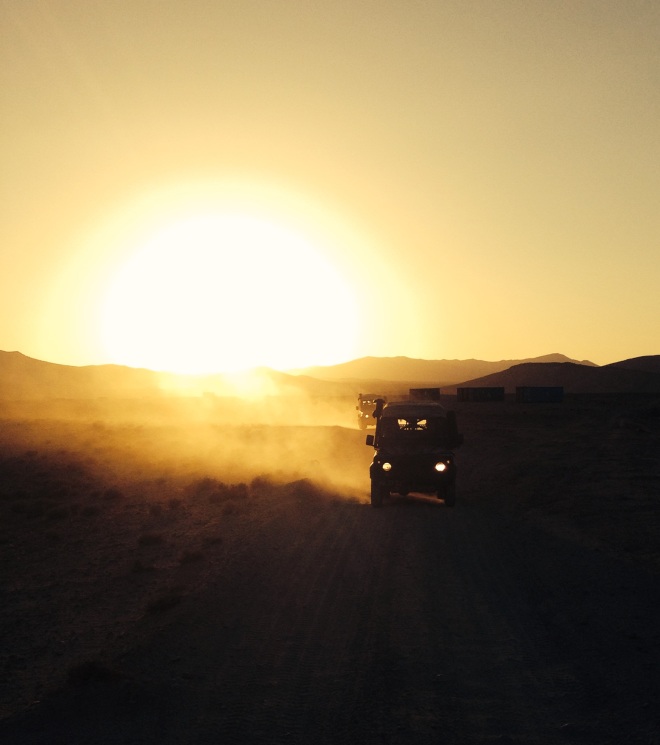 The temperature had begun to fall dramatically at night, partially due to the altitude of the camp. Our nightly showers became colder and colder. Then, our second OSD day signified the approach of the final few weeks. Our stand-down took place at a hotel in Aqaba. It’s always the simple things you miss, and we had a few hours to enjoy a resort with proper showers, porcelain toilets, and a jacuzzi on the roof. I returned to camp that night with a very much-needed haircut (I’d begun to look like some sort of Bedouin Rastafarian) and some good memories.

The following days were spent building a culvert: a pipe that would redirect flash flood water from a road. Once that was done we drove an hour north, to a training camp where we worked like Trojans to build a protective fencing in what felt like record time. At night we told stories around the fire and slept beneath the stars.  It was soon time to return to Al Quwayiyah, and as we returned in convoy we were treated to some fantastic sunset views out over the vast mountain range.

After living with my fellow troops in such a close knit community I felt a sense of camaraderie with my colleagues that’s as old as military life itself. On a personal level I feel privileged to know that I have people around me in 24 Commando who I trust and respect, and whose friendship will last a lifetime.

Remembrance Sunday in the Jordanian desert.

On Remembrance Day we went to a nearby cairn upon which a cross had been built. The padre read sermons and the flag bearers stood proud on the higher ground. The post sounded and we took our silence. Remembrance Day parade is a time of reflection for me, the tradition, the fallen, the pride of the service and the country we serve. Around the world people were united in prayer and remembrance.

Our rotation on guard arrived and we took our posts at each gate. Working the laborious ‘four hours on, four hours off’, we ensured that the security of our camp was maintained. Night passed quietly with only the occasional hound – the wraiths of the desert – to usher away as they came to root through the bins.

Finally, we sat around our kit with nothing but the sand and mountains left, just as it had been when we arrived. I thought back over the many experiences I’d had. We piled on to troop carrying vehicles and headed to Titin camp near the port.  There we waited for RAF transport home on the big grey bird of freedom.

Hot showers, Wi-Fi and cooked meals were welcomed, as was the first proper bed in two months – even though it was a near-falling-apart bunk bed. As the hour drew closer to the flight my anticipation grew. A cold beer and the UK’s unique weather system beckoned.  We got on transport to the King Hussein International Airport and the journey back began, with a 5 hour flight followed by another 4 hours by bus. Soon we were a world away from the sands and heat of Jordan and back in the familiar company of rain and grass. It had been an enthralling escapade and I was happy to be home – but I couldn’t help wondering what adventure awaited us next.

“Our deeds still travel with us from afar,

And what we have been makes us what we are.”