Major Oli Morgan is the Team Leader for the Army’s involvement in the Bloodhound Super Sonic Car project.  As an Aircraft Engineering Officer in the Royal Electrical & Mechanical Engineers, his technical background on Apache is used to good effect to provide the Bloodhound team with technical advice on Engineering Assurance. In addition to his engineering role he is also responsible for recruiting each 6 month attachment of personnel and managing the team on a day to day basis.

It was great to see the Minister for Defence Equipment Support and Technology last week at the Bloodhound SSC Technical Centre in Bristol. Philip Dunne MP visited the Army Team from the Royal Electrical and Mechanical Engineers (REME) working on Bloodhound SSC to see what we had been doing since we saw him at the signing of the MoD-Bloodhound Concordat in Oct 2012.

Minister was impressed how we had integrated into the civilian team building the 1000 mph car and the ground breaking work the guys had been doing. I took the Minister around the workshop to allow each of the REME team to explain their role and what they had achieved during their attachment, which is fast coming to an end in March 13 (Details of the new team coming soon).

Craftsman Rob Fenn, our most junior tradesman (his rank is equivalent to Private Soldier), showed Philip Dunne MP the work that been done on the Super Sonic car’s lower chassis. Cfn Fenn has been part of a small group building this section of the car and he has also had the opportunity to work with Lee Giles, a very experienced mechanic formerly at McLaren R&D. The Minister was impressed by how much exposure Cfn Fenn had to wider engineering and his goal to work towards a Degree in Automotive Engineering. 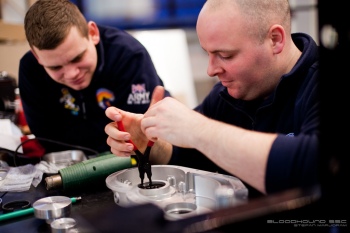 As a footnote to Cfn Rob Fenn’s role on the project, I must put his experience into perspective – he is 20 years old and has recently completed his apprenticeship after completing training at the Army’s School of Electrical and Mechanical Engineering. He was selected as an outstanding candidate in the REME interview process and has impressed Bloodhound’s F1 engineers and designers with his work ethic, willingness to muck in and drive to expand his knowledge. This knowledge transfer – in essence rocket powered professional development – is one of the key benefits of the MOD’s Concordat with Bloodhound. It will create a lasting legacy in each REME soldier’s career and have a positive impact on the Army’s ability to support equipment maintenance and repair, especially on Operations.

Origins of the Ministry’s Concordat with Bloodhound

The origins of the MOD Concordat go back to last year at a chance meeting between Peter Luff MP, then Minister for Defence Equipment Support and Technology, and Richard Noble. The meeting at DE&S’s Defence Vehicle Demonstration event led to an agreement being proposed that would draw together the various strands of collaborative work that already existed between the MOD and Bloodhound. This would provide a platform for deepening the relationship and express the Department’s and the Minister’s own belief in this ground breaking education project and the benefits that it will return to the Department and the Armed Forces. 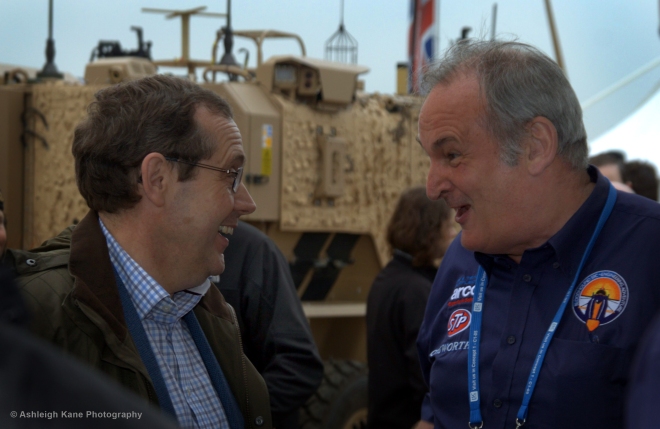 But nothing in politics is straightforward and before we knew it we had a new Min(DEST). Fortunately, the new Minister, Philip Dunne MP was just as excited about the project and progress on the agreement continued at pace. On 1 October 2012 we were all present in the Officers’ Mess at Wellington Barracks in London to witness the signing of the Concordat by the Minister and Richard Noble amongst a throng of broadcast and newspaper journalists. BFBS TV Report

From Philip Dunne MP: “This is a great opportunity for the Army’s Electrical and Mechanical engineers to share experience and develop their skills whilst working on this innovative technology here in the UK; their experience will feed directly back into the front line as they progress through their Army careers.”

At last week’s visit to Bristol, the Minister got to see an example of REME tradesmen working at the cutting edge of technical development when I handed him over to WO2 (AQMS) Mark Edwin to explain his role developing the primary control system for the developmental EJ200 TYPHOON engines. The control avionics will allow Bloodhound’s driver, Wing Commander Andy Green, to control the engine and get the car up to speed before the rocket kicks in and blasts the car through the sound barrier.

In the next blog I will touch on the work the electronic systems team have been doing with the EJ200 engine and the Minister’s reaction to the news that the WO2 (AQMS) Edwin and the team have built a system to control the engine which has been successfully tested on Rolls Royce’s engine simulator.