Soldier under Training (SuT) Christopher Holland is currently undergoing Phase 1 Training at the Army Training Regiment, Bassingbourn. He is currently in the seventh week of the training syllabus, but his first two posts look back at earlier experiences. Here he recalls a visit to the National Memorial Arboretum in Staffordshire. 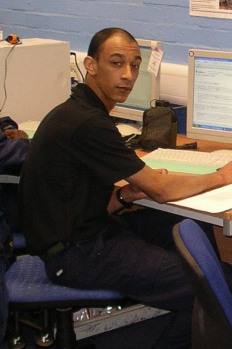 The visit to the National Memorial Arboretum in Staffordshire was a day of mixed emotions.  The land, buildings and architecture were beautiful and the environment was relaxing and peaceful – but it gave me a deep feeling of sadness to think of all the brave men and women that have paid the ultimate sacrifice in the service of their Country.  On the coach journey to the Arboretum we watched a DVD called “In Living Memory” which featured stories of people whose names are listed on the Armed Forces Memorial, the centrepiece of the Arboretum.  It makes you realise that behind the almost 16,000 names engraved in stone there is a life, a story and a history.  I was struck by the blank spaces on the Armed Forces Memorial wall and knowing that one day they will all be full.

The visit to the Arboretum really began a day earlier in the Education Centre. We were split into about eight groups of four or five people and given a couple of hours to research short presentations to deliver to rest of the Troop at the Arboretum.  My group’s topic was about the Royal Engineers on Operations, which we delivered at the Royal Engineers memorial.  The day at the Arboretum began with a two minute silence in the chapel followed by a talk on why we remember.  We then went up to Armed Forces Memorial to have a look round.  The Troop Commander gave us a short brief then we went round looking at all the names on the wall.  One moment that will probably stay with me is seeing my own surname on the wall and thinking whether I really want to put myself in a position where this could actually be me.  The Padre then conducted a short service of remembrance, which was OK, but I think we should practise our singing if we’re going to do it in public again!

After lunch we visited a selection of the other memorials at the site where we delivered the presentations we had researched the previous day.  It was interesting hearing about what soldiers before us have gone through and really made me think about what made them commit such brave acts.  The Troop Commander finished by saying we were all capable of doing such things, but personally I’m not so sure.  Going to the Arboretum was an eye opener and made me think that once all the training is finished we will become part of history.

After a moving day at the Arboretum the training staff relaxed with us a bit and took us paintballing.  On the way everyone was excited not only about the activity but also it was our first real day out of camp since starting training over three weeks ago.  The staff at paintball were all friendly and made us feel welcome.  After a safety brief our Troop and Aden Troop each split into two making four teams.  We played four games in total in which we were the overall winners.  Then we played a game with Aden Troop v Balkans Troop, which turned out to be more about who had the most paintballs left.  I had a couple of grenades; the first one I threw hit a tree and landed next to my own team mates so I think I will have to practise grenade throwing before we do it for real!  Overall, it was a really good day and it was nice to be out of the military environment for a while.

Soldier under Training (SuT) Christopher Holland is currently undergoing Phase 1 Training at the Army Training Regiment, Bassingbourn. He is currently in the seventh week of the training syllabus, but his first two posts look back at earlier experiences. Here he recalls the first week.

Sunday
First day in the British Army! I woke up at 6 o’clock to double check my bag, have some food, and get ready to set off for 8.  I felt a bit guilty for leaving my daughter knowing I wouldn’t see her for at least four weeks and my girlfriend.  It didn’t make things easy as she was crying as I left.  After a five hour trip I arrived at the barracks around 1 o’clock and we were queuing straight away to be sized for kit.  Once finished we were shown our rooms and started to get to know the other lads; we all soon clicked and got on well.  And I realised all the worries I had were the same as everyone else so we were all in the same boat.  Thoughts on the day – daunting and exciting.

Monday
After getting up early around 0530 I was tired and wanted to sleep but we had to get up and shower and be ready for breakfast, which was alright as you can have a fry up and cereal and toast and different drinks.  It did feel a bit like school again that day.  We had a long lecture about finance in the Army which was boring because I wanted to get to the fun stuff.  But I know they’re not just going to give you a rifle on your second day.  After lunch we had a lessons on ranks; I had a good idea already about NCOs but it was good for jogging memory and we also learnt about Officers. Later that day we were issued our AT kit which we wear to move around camp.  When we were all dressed in the same kit we all felt more of a team and part of something.  Thoughts on the day – happy, as I had a laugh with the lads.

Tuesday
Today we were issued our uniform and we all now felt like we were in the Army but already I was missing my family.  When I called my girlfriend in the evening I felt a lot better until Corporal said that we had to do block jobs, but they weren’t that bad considering everyone was running around like headless chickens.  Thoughts on the day – guilty for leaving my daughter but happy that I have got this far to actually start basic training as it’s been a long time waiting.

Wednesday
Today we had a full morning of medicals.  I was worried that the friendliness of the staff would come to a halt when they knew we were all healthy enough to take punishments.  This afternoon we had a couple of lessons in Military Law and Cold Injury and the Corporals started to show us the basic drill steps so we can march up to the cookhouse.  I now feel a bit more like we’re getting into it and I’m looking forward to PT tomorrow.  Thoughts on the day – happy to be healthy.

Thursday
First PT lesson today and I did the 1.5 mile run in 9 minutes 5 seconds.  I feel bad about this because I know I can do it quicker and also shot off at the start and burnt out too early.  Later on we had a lesson in skill at arms; it was funny looking at everyone’s face as they came out of the armoury holding their rifle – it was like kids at Christmas!  Thoughts on today – head bashed, overload of info! Wow!

Friday
Today was a long one but it was also a good one as we had our first exercise, ICE BREAKER.  The staff made the learning fun with the examples of camouflage and concealment and the lesson on ration packs where the Corporals pulled a huge French stick out of the small cardboard ration box.  The night time stag duty was pretty rough but walking up and down the dark wooded area I couldn’t help feeling a sense of excitement and pride that I’d almost completed my first week as a soldier in the British Army.

Saturday
Today was more relaxed than we’d been used to as we were given the afternoon to admin ourselves and clean all our exercise kit, but in our own time.  Me and the lads were having a laugh talking about the night before whilst we polished our boots; there was high morale throughout the Section and overall a good afternoon.  I got the feeling that everyone was feeling pretty pleased with themselves and proud of what they’d achieved.  Thoughts for the day – sleep, sleep, sleep!

Sunday
Today we went to the chapel and I feel a bit sad as I have been away from God for a long time.  It was my own guilt making me sad, I think, as the service was really nice.  We spent the rest of the day on admin and getting ready for the week ahead.  Time management is a real hard thing to get control of because there always seems to be more to do.  And that was it; the first week was over.  The time had flown by and disappeared into a blur.  Really looking forward to week 2 and getting stuck in to the real training.