The Corps of Army Music Short Term Training Team (STTT) led by Warrant Officer Class One Shane O’Neill arrived in Lilongwe, Malawi after a 14-hour flight via Johannesburg. With lots of queuing in airports in between, we finally arrived at the Sunbird Hotel, where the team relaxed and prepared for a rewarding 2 days work with The Malawi Defence Force Band (MDF Band). The team arrived at the 2nd Battalion Malawi Defence Force camp in Lilongwe, home of the MDF band and were introduced by their Director of Music, Captain Levison Chisambi, himself a graduate of the Royal Military School of Music Bandmasters course.

The team quickly became acquainted with members of the Band and sat down to join in with their full band rehearsal. Part way through the morning the OCs of both our team and the MDF Band left to go on a recce for a joint engagement for a charity golf event for the Malawi War Veterans charity. Rehearsals for the engagement continued under the direction of Sergeant John Storey and myself.  After lunch we each took sectional rehearsals of the MDF Band working on music for the engagement, as well as covering some basic musicianship skills, and answering questions on a variety of subjects. After a hard day’s work we returned to the hotel for a well-earned rest.

With part of the day free before the engagement at the British High Commissioner’s residence the we took the opportunity to visit Lake Malawi, which was an amazing site and also visited a local village community market and saw first-hand the talented people had carved wooden gifts to sell for their community. After returning to Lilongwe the team headed to work where both the brass quintet and the wind quartet provided musical entertainment to all the guests as well as performing the all important national anthems of Malawi and Great Britain. We were then invited to enjoy some fish and chips and chatted with various guests before retiring to the hotel. A second day of training with the MDF band went ahead, with final preparations for Saturday’s joint engagement being the focus. After a full band rehearsal the team again took sectional rehearsals continuing to work with the MDF Band on music as well as covering instrumental maintenance. At the end of the day the team all had photos with our new friends in the MDF Band.

The War Veterans Commemoration Event at Lilongwe golf club, which was attended by many senior MDF officers as well as the British High Commissioner and the newly elected Vice President of Malawi, was a great success. The band provided musical entertainment all morning on the 18th green and then further music was provided during dinner by the wind quartet. At the end of this joint engagement with the MDF Band, the team said fond farewells to our new friends in the MDF band and returned to the hotel to pack for the drive to Blantyre in southern Malawi. Next day we  packed up and headed off in our two trusty vehicles fully loaded with bags and instruments on the six-hour drive to Blantyre… After some excellent navigation, we arrived 9 hours later with 4 tired drivers who had to show their off road skills on multiple occasions and good use of the emergency stop to avoid goats that appeared to have suicidal tendencies as we travelled through the country. After checking in to our second hotel, the team settled for the evening. On the 9th June we went to Blantyre hospital to work with the Sound Seekers Charity providing music for the event and working with hearing impaired people helping them to have fun and express themselves with various musical instruments, a very worthwhile cause and a satisfying day was had by all. 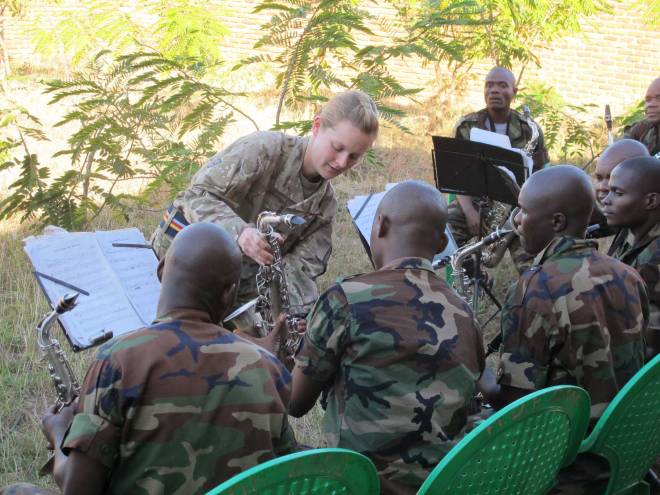 Arriving safely in Johannesburg after flying from Blantyre, the wind quartet were straight out on an engagement, at the British High Commissioner’s residence in Pretoria whilst the rest of the team enjoyed their new surroundings. The team met with the South African National Defence Force Ceremonial Guards Band based in Pretoria for a day of training. After watching the Band perform a marching display and small ensemble performance we and the SANDF CG Band joined up for full band rehearsal under the direction of our Bandmaster and enjoyed another successful day. There is a high degree of satisfaction when both the training and rehearsals go so well.

On 12th June  the brass quintet performed at the British High Commission in Pretoria over lunch before the whole team headed to the Soweto Theatre to spend the afternoon working with local musicians. Next day, with part of the day free, the team took the opportunity to take in some of the recent history of South Africa visiting the Constitution Hill Museum and Court  and learning much about the country’s transition from apartheid to democracy. Later that evening we supported another Dinner Night before retiring for the evening.

The next day we began the drive north towards Botswana stopping en route to spend part of the day with Modderspruit Sunrise Hospice who work with children and families living with HIV and Aids. This was without doubt the most harrowing and moving part of the whole trip, but it was a privilege to be able to provide a little entertainment and ‘musical therapy’ for the children and families living with this disease.  The end of the visit culminated in the performance of the British and South African National Anthems, the children gathered together and sang their anthem as we played. Having performed anthems at both Wembley and Twickenham, I can guarantee that these pale in comparison to the passion and energy for life that the children sang with. Very moving. 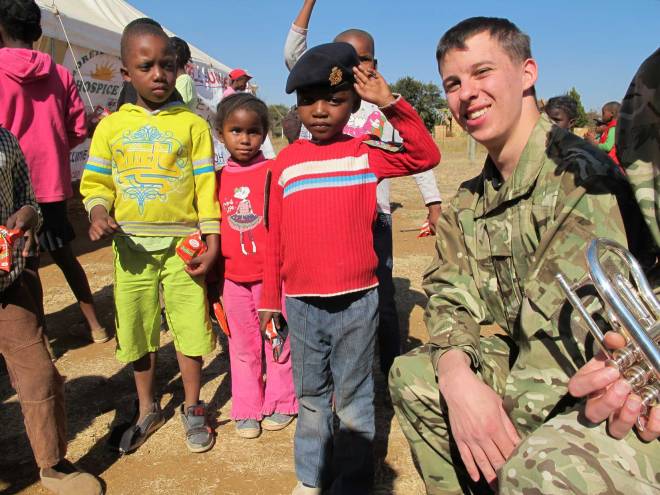 Before continuing on to Botswana, the team took the chance to go on an early-morning game drive taking in some of the wildlife of South Africa in their own environment. After enjoying the spectacular sights and sounds, the team continued the journey to Garbarone in Botswana, arriving at the hotel late in the afternoon.

On the 16th June the team spent the day with the Botswana Defence Force (BDF) Band Garbarone, after introductions the team assisted with an Officer Commissioning Parade rehearsal and provided feedback to the band afterwards. In the afternoon the bandmaster took a full band rehearsal of the parade music, then later in the evening the team joined with the BDF Band performing a concert for the Officer Cadets.

Next day it was the turn of  the brass quintet who performed at a Queen’s Birthday Party at the British High Commission enjoying some traditional British food and providing background music. Our final day of training with the BDF Band proved to be an interesting one, despite major issues with a power cut the team still managed to provide some tuition to the various sections of the band. The team were later taken on a tour of the BDF zoo where they keep animals for the purposes of training and educating their soldiers about wildlife they may encounter in the field. 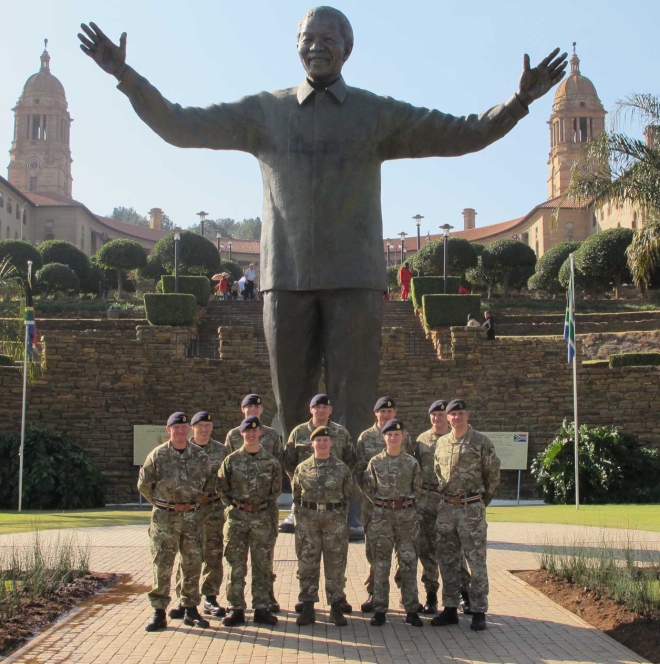 The team with a statue of Nelson Mandela in Johannesburg

After leaving presentations and photos with the BDF Band the team headed back to the hotel for a final meal and to pack for the journey home. The team packed up the vehicles and drove from Botswana back to Johannesburg for the flight back to the UK. The team arrived home full of amazing memories, life-changing events and feeling thoroughly satisfied that we had completed the trip and leaving the musicians we trained with plenty of new skills and things to think about over the coming months.

Find out more about the Corps of Army Music