Lieutenant Claire Jackson is team leader for the British Army’s combat camera team for H19. She works alongside Sgt Dan Bardsley (photographer) and Sgt Paul Shaw (video cameraman). They are based in Afghanistan and will be covering the work of the Armed forces, in particular 7th Armoured Brigade – the Desert Rats, throughout the winter.  They capture moving and still imagery from events out on the ground that national broadcasters don’t have access to.

Just go with the flow

I’m currently sitting in Forward Operating Base (FOB) Lashkar Gah waiting for a flight back to Bastion. We came out here for a tasking near Kajaki but unfortunately it’s been put on hold for the day and we are required back at base for another job.  We’ve been out here two months now and have had a reasonably busy tour so far with lots of taskings and last-minute changes which send all plans into disarray.

Those of you who know me, know that I am ‘Little Miss Organised’ to the degree of putting Excel spreadsheets together for past holidays (something my boyfriend and family will agree proved very useful in terms of being able to fit in as much as possible into our trips!!) Therefore it’s been quite hard for me at times to adapt and just go with the flow when plans do get changed.  It’s doing me good though. 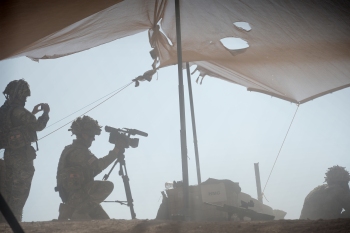 Paul makes the most of his artistic skills during some downtime

Before I go any further I must apologise for the use of military acronyms or jargon throughout this blog.  When I first enlisted I was completely shell shocked by the amount of TLAs (they even have a name for them – Three Letter Abbreviations!!) the MOD uses in its everyday language and thought I would never understand what people were talking about.

I can just about get by on most days now without having to use Google or the Army Arrse (Army Rumour Service) website to find out what certain abbreviations mean.  My parents have insisted though that on my return to the UK, I’m only allowed to visit on the condition that I revert back to using the full English language and stop using military jargon!  But for the rest of this tour, I’m sorry but I can’t avoid the use of it.

A salute marks the start of the ceremony

Our first tasking was a low key government video project that was cancelled at the last minute. Feeling very sorry for ourselves and with all our kit packed and ready to go for the first trip out, we jumped for joy when we heard that we were being re-routed to Patrol Base (PB) Ouellette to cover the base handover to the Afghan National Civil Order Police (ANCOP). So having been in Theatre for only six days, suddenly we find ourselves outside the wire and at the flight line about to catch a Chinook out to Ouellette.

I don’t have the best of ‘sea/air’ legs so was slightly apprehensive as we boarded the aircraft and didn’t really know what to expect.  I just prayed I didn’t feel too sick as I didn’t want to look like a feeble woman out here on her first tasking with the team.  But I had nothing to fear, the flight was awesome with some amazing views looking out of the back ramp, and I felt great! The ramp stays slightly open for the gunner to provide protection if necessary. We have been using the Chinooks regularly to fly in and out of bases, so much so that to me it’s almost like hailing a cab now.  I feel right at home.

View of the back ramp of the Chinook and beyond

Our stay at Ouellette continued to be a string of new experiences for me – the first one being told what a ‘desert rose’ is…..and it’s not a flower.  Let’s just say this sort of rose was designed with male soldiers in mind. But with the invention of a female ‘She Wee’ (for those of you that don’t know what that is, it’s basically a funnel and a tube and I’ll leave the rest to your imagination) and me having been issued a nato green one prior to deploying (I had a test run in the shower before using it for real!), I could now also use the desert rose if I so wished.  But with the lack of a corrugated metal sheet which normally provides a small amount of privacy, I declined during daylight hours and opted for a wooden cubicle and a ‘john bag’ and then waited until darkness fell to put the plastic pipe to the test!

Making use of a ‘desert rose’

PB Ouellette was a fascinating experience seeing how the soldiers outside the wire live, and inside this particular patrol base, how they provide security over Route 611 – a route I became fairly familiar with that first night when asked if we would help out on stag duty by keeping watch on a sentry post (sangar) for any activity beyond the base.  The last time I did something similar was at Sandhurst during my Officer training when the only real threat was being attacked by the instructors.  And now it was for real!

Waiting for dinner to cook 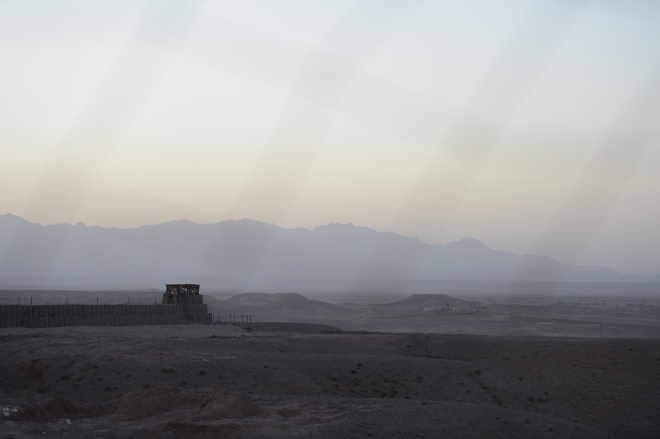