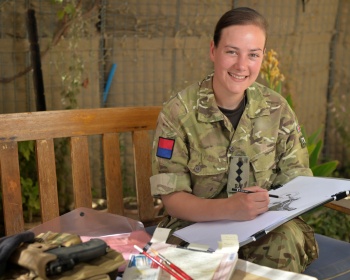 Captain Sophie Whitaker is a serving war artist whose main job is to provide Joint Fires Targeting support to Task Force Helmand on OP HERRICK 18. As a member of 74 Battery (The Battleaxe Company) 39 Regiment Royal Artillery – attached to 1 Royal Horse Artillery, Sophie works in the Brigade Headquarters, Lashkar Gah, where she finds time between an often hectic schedule to put pencil to paper.

Since my trip to Main Operating Base (MOB) Price my feet have barely touched the ground – well, in the metaphorical sense at least.  They have, in fact, been firmly rooted to the ground underneath my desk, for near on 12 hours a day…

On return to the Headquarters in Lashkar Gar, I have found myself sitting at a new desk, but with a new team. My old team is now back from R&R which means that I am next! However, due to the ongoing requirement to reduce our footprint in Afghanistan, I have been gradually handing over my role to WO2 Gardiner, who is now singlehandedly running that particular target development desk.  I now sit centrally in the Joint Operations Centre (JOC).  So let me tell you a little bit about the JOC.

Reality is often not as exciting

It sits within the main TFH headquarters, in a small room in the very far corner of the floor plan. The door is always closed, and a little red light outside indicates when visitors ought to keep clear! The JOC is a hubbub of activity as it is the nucleus of all current operational activity and is run by a Battle Captain, to include a team of between 15-20 people at any one time. ‘Deskheads’ are rank ranged from sergeant through to captain and comprise a variety of cap badges, services, reservists, and sometimes other nationalities. During an operation, communications, requests for fires, and air space de-confliction are all decided upon here. At the height of activity, ops officers run in and out to brief their superiors, in addition to superiors coming in to watch a situation develop and issue their directions. 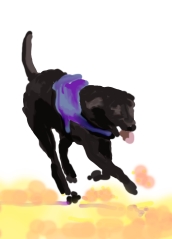 However, reality is often not as exciting as that, and more often than not the days are quiet (which we are thankful for, as no lives are at risk) but also long. Three daily briefs break up the monotony, and with the mealtimes to look forward to, the days do soon pass. However, there is change afoot, with MFO boxes littering the headquarters, large rolls of parcel tape and black nasty on desktops, and large bags of shredded pink paper waiting to be burned – signs that we are moving! It is strange to think that despite many significant events – Wimbledon, the Lions victory, The Ashes and of course the royal birth (congratulations!), we too are a small part of history as we will be the last headquarters and staff to be based here during this campaign. 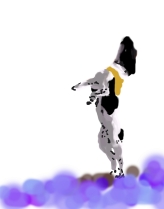 It is for these very reasons that the Operational Art book I have mentioned is being produced – to record Helmand Province from those soldiers who have set foot on it, lived in it, and worked alongside the local people here. Perhaps one day, others will get to experience the beauty of this country in a less turbulent era. In addition to my day job, I have now been given more direction to oversee the production and editorial of the art book. So far I have had healthy numbers of entries and there is certainly some talent out here – particularly from my night shift counterparts who, after browsing through my ‘how to draw caricatures’ book, have produced some convincing portraits!

This week I have been working on painting a watercolour of a military working dog (MWD). At first I thought of doing something a bit different, aiming to capture the idea of movement and the character of the dogs at work. Although digital art is somewhat of a taboo subject amongst some, I decided to set myself a few five minute challenges, of seeing what I could produce using a Serif XD6 photo editing programme with the photographs taken during my visit to Price as reference. Did you guess what breeds they were?!

Using a more traditional method, here is a very brief explanation of the WIP for this week’s painting ‘The Release’.

Having spent some hours observing each of the military working dogs at work, I was keen to paint something that would show their eagerness to work and their enthusiasm for the job – if ever a dog can display this! I was particularly drawn to Senna, a German Shepherd bitch with a signature bob tail which she had lost long before she joined the army. Her purpose is force protection. I was inspired by her movement at covering the ground so quickly and so effortlessly, with her eyes unblinkingly fixed on her target.

I again used masking fluid to mask out the figures of the dog and handler before overlaying a wash and starting to build up a suggestion of shadow in the distant HESCO wall. This piece is painted on A3 sized paper, and even with the small squirrel brushes, the brush strokes are too wide for real detail. Nevertheless, the focus of this piece is the movement of the dog.

Here the masking fluid has been removed, and a pale blue sky has been added along with the suggestion of the dog’s shadow. Then I started to concentrate on the dog with simple, bold brush strokes to indicate the dark mask of her face and ears, and a bit of depth in her chest and legs. Detail was then added for the harness, and I painted in the impression of the handler. To finish the painting, I decided to create more definition between the subject and the background and so painted a very light white wash over the background to make the subjects stand out that little bit more. And here is the finished piece!

For my next project, I shall have a go at caricatures and you’ll have to wait and see how I get on! Any volunteers to be my first (victim) sitter?

2 thoughts on “An Artist Abroad: Life in the JOC”