Musn Batai is a musician in the Band of the Irish Guards. During a normal working day he performs on the oboe and may play at state and ceremonial events across the capital and around the world.

Ride of the Valkyries

After a serious week of preparation for the Scarlet and Gold concerts, the Massed Bands of The Household Division, part of the Corps of Army Music, gave fantastic performances on the 22nd and 23rd of November at Central Hall, Westminster, with a versatile programme. Great soloists and breathtaking ensemble work from all the members of the band delighted the audiences.

I felt very privileged to sit in the band as the principal oboe and had a great pleasure to be part of this musical spectacular. The concert started with the National anthem followed by Wagner’s The Ride of the Valkyries, with the Fanfare players on the balcony, decorating the venue and filling the hall with their glorious sound. The opening was truly powerful and instantly gave an insight as to what the audience was to expect from the rest of the concert.

Following Gounod’s March Militaire we played a piece, which was in my opinion one of the highlights of the evening – Alfred Reid’s Armenian Dances which were originally composed for a concert band and there are truly challenging moments for all the instrumental parts; in particular woodwinds. The Band played extremely well and demonstrated its excellent skills.

The other highlight was the world-renowned film music from Spielberg’s Oscar winning drama Schindler’s List. I would like to mention Lance Corporal Rebecca White who played the solo violin with a superb taste and fantastic musicality. My part was not particularly busy in the piece so I had a chance to glance at the audience and notice that they were clearly ‘blown away’ by the unity of the ensemble and the soloist’s sensitivity. It was a real gem in our programme. 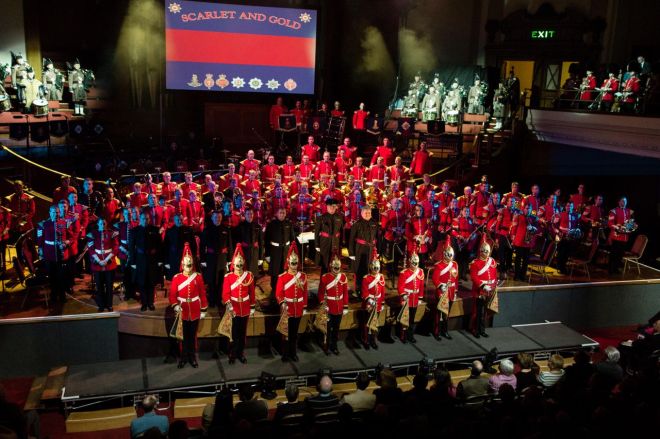 The show had a sudden change after the solemn melody as the Corps of Drums, 2nd Battalion, The Princess of Wales’s Royal Regiment marched on. They made a spectacular show with use of ultraviolet lights while using fluorescent yellow drumsticks as the venue’s lights were switched off. The following marches made everyone stomp their feet and enjoy the traditional military music. I heard people whistle or hum the well known marches even when we went out for the interval. Upon return the Band performed Star Wars by John Williams. This piece also received support from the fanfares and the lightning display which again made this musical event more effective. It almost felt like the moments from the film, ‘Star Wars’ were brought into the auditorium.

The pipes are always loved, it was not different this evening either. The well known tunes played by the Pipes and Drums of The London Regiment, were very well received and set the mood to a very light hearted overture from the MGM Classic film ‘The Wizard of Oz’.

The film music led us to the Guards Big Band’s performance of three pieces. They were led by Colour Sergeant  Jason Libby. I must admit this was the first time in my life I wished I could play a brass instrument or saxophone and be part of this ensemble. The superior playing was breathtaking. The members of the ensemble were completely unified and clearly had a great time performing. Their enthusiasm made everyone feel part of their show. Third piece, A Foggy Day in London also featured a soloist/singer, Lance Sergeant James Scott.

After the magnificent performance of the Big Band, the concert reached its finale which consisted of pieces such as Bizet’s Farandole, Handel’s See the Conquering Hero Comes and a very effective arrangement by Lieutenant Colonel Duncan Beat. The arrangement was a combination of Will Ye No Come Back Again and Auld Lang Syne, with the bugle call Last Post.

The audience seemed to love the show and I have no doubt that they will return eagerly in the future to this unique musical spectacle. I really hope that I shall be in the band again to take a part in this great event, as ‘Scarlet and Gold’ is one of the rare opportunities for the members of the band to engage with the public in the concert ambiance and share the beautiful marches and versatile music from all around the world.