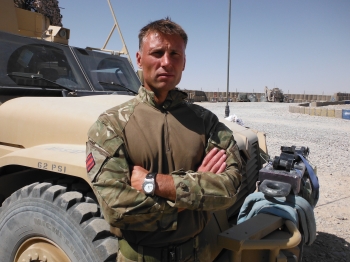 LCpl James Hylands (39), is a TA soldier who is currently serving with 8 Troop, 73 Armoured Engineer Squadron (AES) on Operation HERRICK 17.  He deployed along with the rest of 21 Engineer Regiment (21 Engr Regt) as part of Task Force Helmand Engineer Group, at the beginning of September 2012. Whilst on tour the squadron is know as Engineer Close Support Squadron 1, which covers the northern areas of operation of Task Force Helmand (TFH).

Well as a new week starts the job load changes. This week sees the construction of a platform for heavy equipment in aid of 39 Royal Artillery who join us in Patrol Base (PB) Clifton for the duration of Op Herrick 17. The initial design and order stage had been passed and the first load of much needed stores arrived promptly Monday morning, by locally employed contractors (LECs) selected to fulfil the task of delivering lorry loads of aggregate to complete the 21×10 metre Hesco construction.

Being my first tour and more to the point my first interaction with LECs I didn’t really know what to expect. A small team and I were given the task of searching the vehicles and speaking to the drivers before they were cleared to enter the PB. This, to be fair, was made easy as the locals co-operated with everything asked of them, back home in the UK the same process would have been a lot more difficult, but here went rather smoothly. What did catch my attention however, was the condition of the vehicles being used.

In a world of ‘hi-viz’ and ‘health and safety’, it brought a smile to my face to see vehicles which resembled something out of the TV series scrap heap challenge! Things were falling apart, leaking and patched up, but the trucks worked and, more to the point, delivered what we needed. As the saying goes ‘poverty is the mother of ingenuity’. Once tipped the plant crew set to work in the medium and light wheeled tractor distributing the aggregate up into small piles around the PB for when they were needed later on.

A delivery of mil 7 and mil 5 Hesco (large and medium sized baskets) from Main Operating Base Price meant the job could effectively start, so LCpl Lee Hill rounded the lads up for a job overview, tasking groups to work in various areas to ensure the platform was constructed as quickly as possible (5 days was the target). The existing platform which was in place was quickly pulled down by the plant and the ground levelled ready for the new build. What was required was a larger platform on which an old 432 tank launcher sat with a large firing range around it. All good plans don’t always go to plan and this was about to happen to 8 Troop. 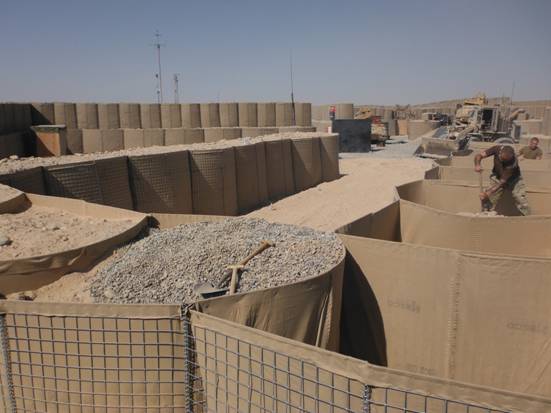 Due to a repatriation service at Camp Bastion, LCpl Lee Hill and other members who were good friends of the deceased had to pass the task over to the remaining troop members, LCpl Paul Robb stepped forward for the challenge, a TA member from 591 Independent Field Sqn who works in the civil service had chance to shine within the troop. The next problem to raise its ugly head on this job was a burst hydraulic pipe on the Medium Wheeled Tractor which took it out of action.

It was now estimated the original five-day window would now be a seven-day task with early starts/late finishes needed.  Mil 7 Hesco turned out to take for ages to fill with the remaining plant, the sheer volume of its design and the bulk required to fill it with aggregate was staggering it took the majority of the extended time. The outer top mil 5 was relatively easy to complete and by the end of day seven we were able to allow the 432 tank to mount the platform.  The job was effectively ready to begin albeit the surrounding landscape required ‘dressing up’ which has been planned in to tie with a maintenance day of the 432.

Seven days of hard work have passed. Lesson learned from the project on this occasion is always have a back-up plan ready for the unexpected eventuality, which in this case came twice for 8 Troop.