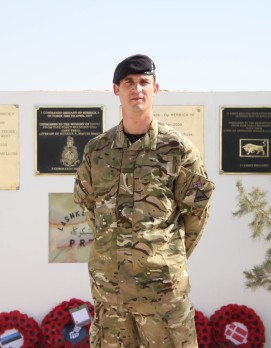 He is responsible for transmitting, receiving and distributing messages within Main Operating Base (MOB) Lashkar Gah. Secondary duties include providing support via telephone to outstations around the area and monitoring the communications systems.

Christmas is now over and the Troop enjoyed the festive period the best that we could. On Christmas Day we had a late start with everyone getting together in the morning to open our presents from friends, family and some kindly donated welfare boxes. It was a very relaxed day with everyone sharing their gifts.

That said, there was still work to be done and this was shared amongst everyone, to ensure that we could all take part in the day’s activities. All traditions were met on the day especially Christmas lunch. The chefs put in a lot of hard work and it was a fantastic meal. Once everyone was full from the turkey dinner we departed the table and we went to see Santa. We received a gift donated by ‘UK4U’, which was packed full of little gadgets, followed by a photograph with Santa.

LCpl Chris Simpson organised a day of activities for everyone. In true military fashion he turned the occasion into a competition involving our American friends, who work downstairs. The day consisted of a variety of sports and a quiz in the evening. The only thing that was missing on the day was the good old celebratory drink; however this didn’t stop us from enjoying the day.

Waxed off for charity

New Year has got off to a good start and it was all quiet with no surprises. LCpl Beck had grown his moustache in ‘Movember’ and waxed it off for charity. The event itself was successful with him raising about £500 for Help for Heroes and The Army Benevolent Fund. As people gathered round to see the event it appeared that he was starting to get second thoughts. However with the pressure on and in true military fashion, he cracked on and commenced the removal process. With the pain and blood evident he kept a brave face – with momentary lapses. After around five attempts the moustache had been removed. 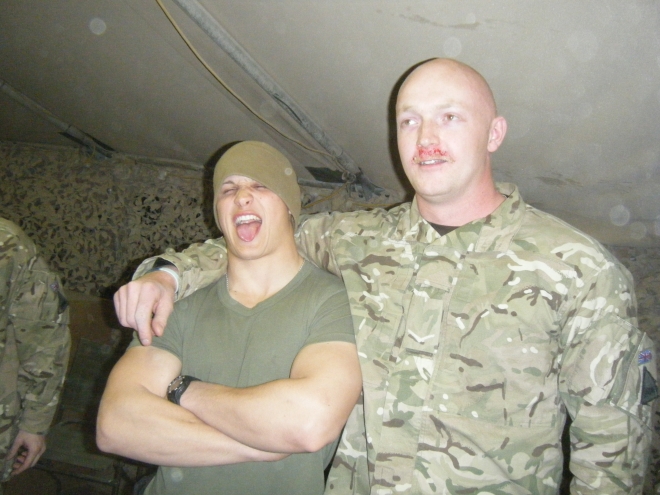 Recently, the boss has decided to stop the PT in the mornings, as it is too dark for him to get out of bed. People are happy with this concept as they’re not getting up before the birds start singing. However, he has decided to take individuals out to do PT throughout the working day. So the idea of ‘no organised PT, supposedly implying no physical activity’ doesn’t pass muster with the boss.  The OC has also started a charity darts competition for the Troop and the wider Main Operating Base.

I am now just about halfway towards my R&R and I am looking forward to getting back to see my family and friends and more importantly my girlfriend.

I hope that everyone back at home managed to have a great Christmas and we wish them all a Happy New Year.